Since I got access to a couple of Estimote UWB beacons, I was craving to find out what makes it tick. Let me take you on the journey of absolutely destroying one of them indefinite. February 2018 was the month I finally cracked all the details of all major components on the PCB 🙂 I will give an overview of all components I have identified and where these components connect to both controllers. Not all components might be an exact match, but I will figure that out later.

If you are also interested, you can buy the devkit here. You will get 4 UWB beacons to play with.

Normally before doing a reverse engineering effort, I look at the FCC pages for more information on the device. It seems that the UWB device does not have any FCC certification (could not find it on their site nor on the packaging of the device). So I went ahead with desoldering every component and labeling them from 1 to 130. This number is corresponding to the container where I put the component in. The last component to be desoldered with hot air was the DW1000 which I did not have a container for so I tossed it together with the nRF chip. This explains the number 98-2. In time I will remove all the numbers because I have given them a significant name (i.e. U1, X1, R1, C1). I will spread the BOM in tables throughout the whole article not to make it a bulky thingy. 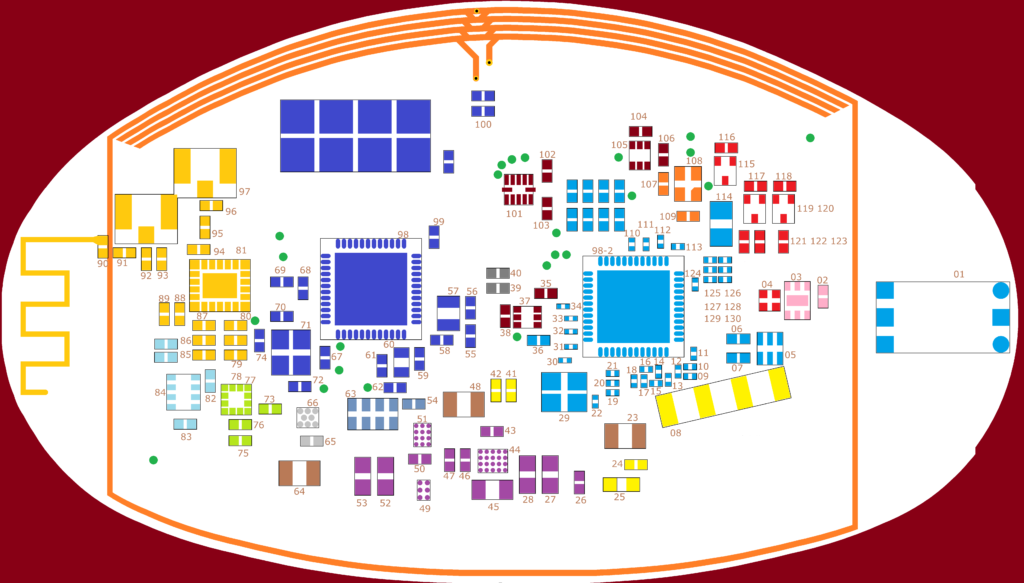 When the process continued I was able to detect which passive components were belonging to which IC’s so I gave them a color coding on the above image. After looking up the datasheet of each active component I could see a 1:1 correlation between all the reference schematics and the Estimote UWB.

Mind that this article is still in progress. The major chapters are defined and in the coming weeks I will add the content of all chapters.

Abrasive process to reveal the layers

Now getting back to destroying the PCB. After cleaning up the PCB I used a sanding paper to get rid of the copper and epoxy bit by bit. The first part I did mechanically, but the last touches were done manually to prevent sanding away too much copper. 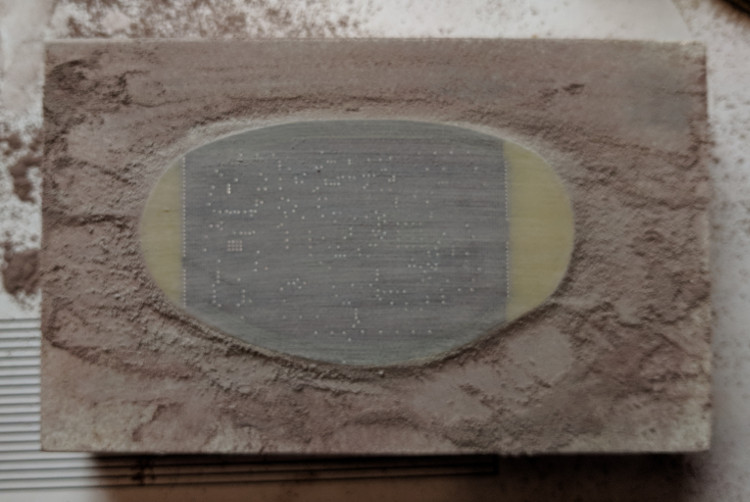 It is so funny, having the page up for like 5 days I got 18 hits on this page in just a couple of hours. It seems that most clicks are coming from Poland. Is it Estimote themselves who are enjoying the beauty of this nifty reverse engineering? I think they don’t mind if I write opensource firmware so their hardware sales gets a nice boost. Maybe I will get some shares from them (ROFL). I just contacted them and we will have a call next week to talk things through. Their R&D department was impressed with the work I already did. I am quite interested in how far they support opensource community. I also asked for their list of reference designators so I can use the same component identifiers as they do. Let’s have a competition who has the nicest design documents :-p

On the site of Estimote there were the specs of the UWB device. It gives hints on which components I am looking for in the journey to crack this pearl.
==========
Estimote Location Beacon with UWB
Hardware revision: I1.2

I will make a paragraph on every section and try to come up with a schematic for that:

nRF52832 Bluetooth® SoC ARM® Cortex®-M4 32-bit processor with Bluetooth Low Energy (BLE).
The specs say it supports Bluetooth® 4.2 LE standard. But the spec of the nRF chip says it supports Bluetooth® 5. Of course, something to look in to. There is a smart front end which has 2 antennae. One PCB antenna and one connector for an external antenna. The end goal is to connect all the BLE devices together in a mesh network. A room should be fitted with a couple of UWB Anchors which are stationary beacons. The other beacons in the room should determine the position and share that position with the mesh network. One of the anchors is connected to a gateway which shares all locations of all tags with a WiFi network. Then you can connect any phone to the WiFi network and keep track of the UWB tags in the building. 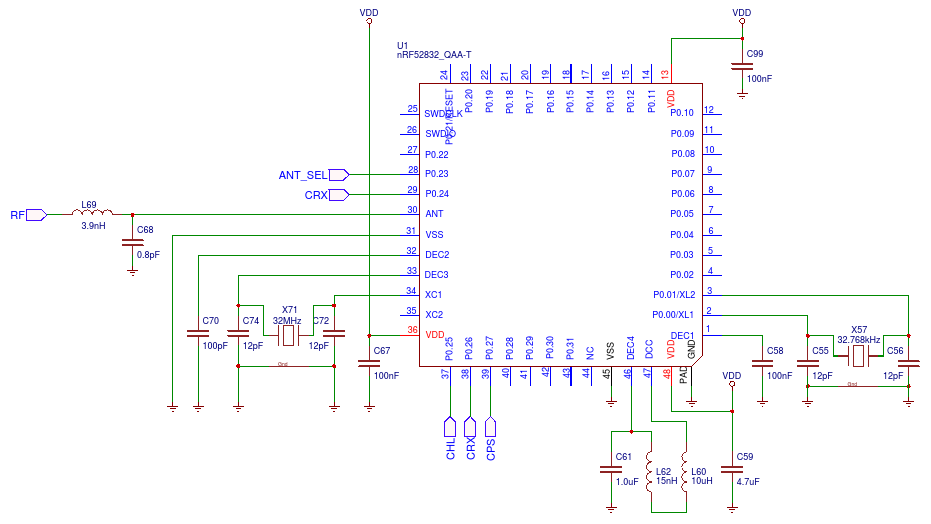 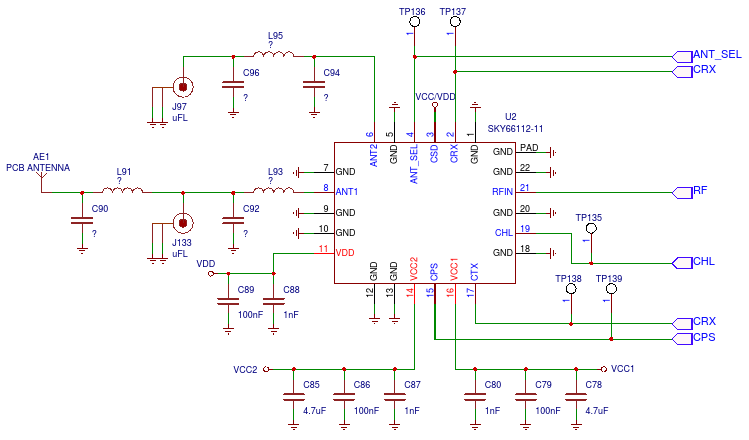 And this is the part where I am interested in. With this technology you can measure the Time of Flight (TOF) which says something about distance. Using triangulation will tell you also the absolute position especially indoors. 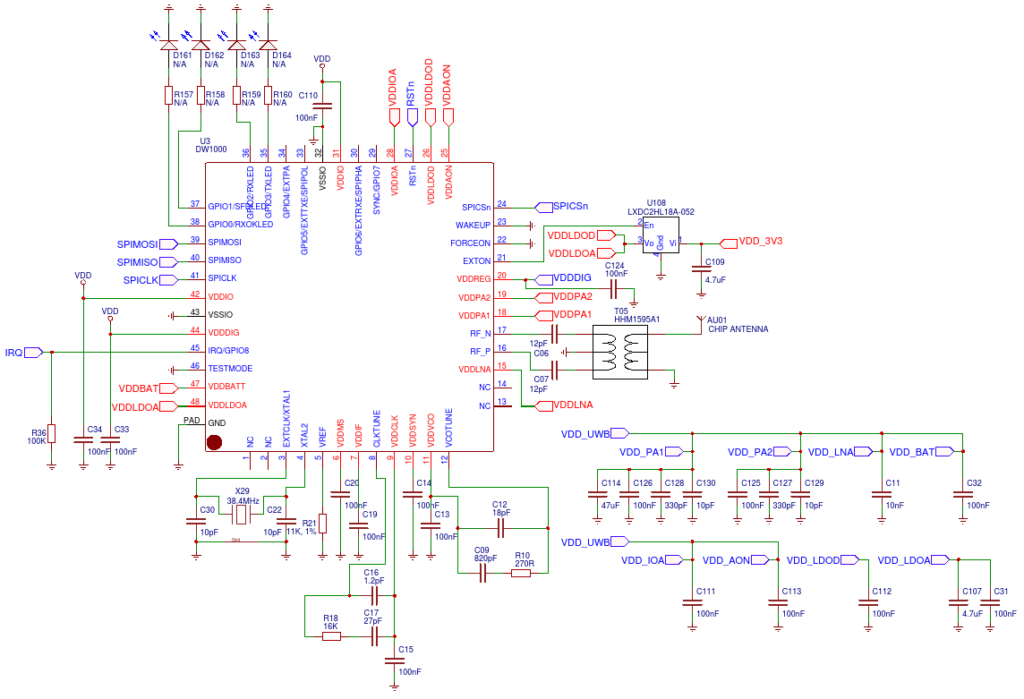 TBD. There are three IC’s which I could not identify (yet), but it does not have my immediate attention. For making new firmware I need the major components and their connected sensors. The power supply/enable switch mechanism is stright forward.

On the board is a connector which can be used for GPIO. On this connector you can run the robotics indoor example as described on the Estimote website. It looks to be open source at first glance, but it seems to have compiled libraries. Of course, I will have a look at how to hack into that later.
The connector is reachable even without taking the PCB out of its casing. On the silicone casing there is a marking where the 4 pins should be inserted. There is also another place where you can do GPIO and that he at the pads where the pogo pins can be hooked up to. These can be used to do firmware upgrades and it can probably be used to power the unit.

The second part of the GPIO is wired to the DW1000 chip. On the PCB there is room for 2 components in series per IO. This could mean a resistor + a LED per output? Let me first find out the specs of the DW1000 to see how much it can sink/drain. 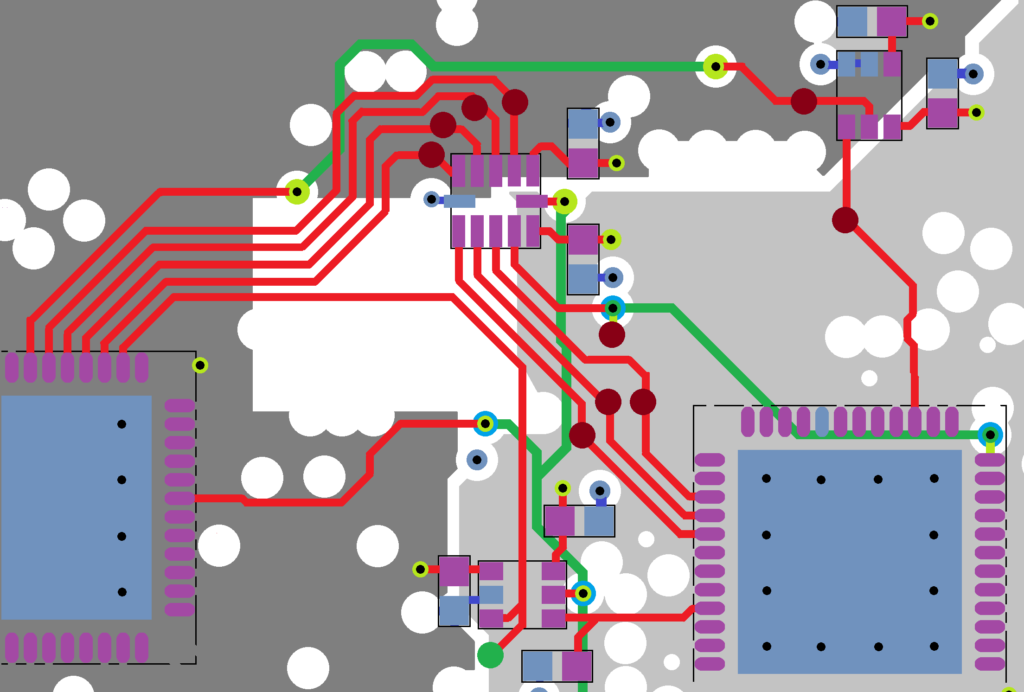 If you look closely you will see that all three level shifters get their power supplies from 2 different gray power planes.

Here a list with the signals which are tied between the two controllers:

I guess that the DW1000 is consuming loads of energy and I also think that the complete power rail of that section of the board is switched on/off depending on the need for that function. I am not sure if the level of both power rails (nRf and DW1000) have different voltage levels. I will be doing some measurements with a scope and logic analyzer later. 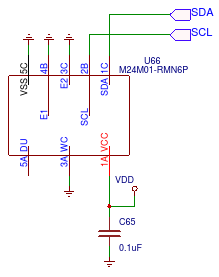 The list of sensors was guiding me in which components (or equivalent components) could be on the PCB. Just combine the exact text with the SMD markings and you find the component on Google, DuckDuckGo, Bing or whatever other search engines. I wish it was that easy, but in the end, I think I found out enough to work with.

This one, especially this one was hard to find. I was sure it had a I2C interface looking at the pins. SCL and SDA were connected to other identified I2C components so this one had to be one too. I kept on coming back to the well used MPL115A1(SPI) MPL115A2(I2C) but these were not pin compatible. Finally I found out, via Google image search, that the pins match with the Bosch BMP280. 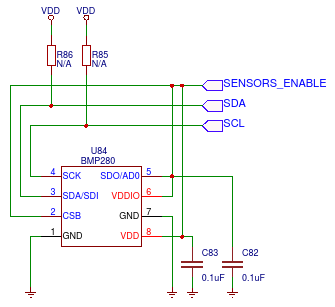 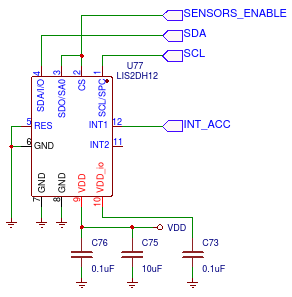 Did not find this one, I am going to try to find it with some freeze spray, it will reveal the component almost instantly (when the update rate is high)

Is this for an analog reference or just to measure the battery level. I think it is the last one . ..

Why did I do this?

From my Altran innovation budget at work, I was able to buy 12 Estimote UWB location beacons. A couple of questions:

Why not choose Philips Visible Light Communication? As an employee of Altran, I can probably get my hand on information from co-workers. They have worked with that technology already. But I don’t want to do that. All my work on this site is in the open-source domain. I also don’t see any open-source libraries which make use of that technology (yet). Maybe I need to look harder. In time I do want to make a comparison between UWB TimeOfFlight and VisibleLightCommunication (VLC). Subscribe to this site and you will get a message as soon as I did that. The advantage of VLC is that the camera needed for that is on everybody’s phone already and the technology for UWB is not in so you need a separate device. 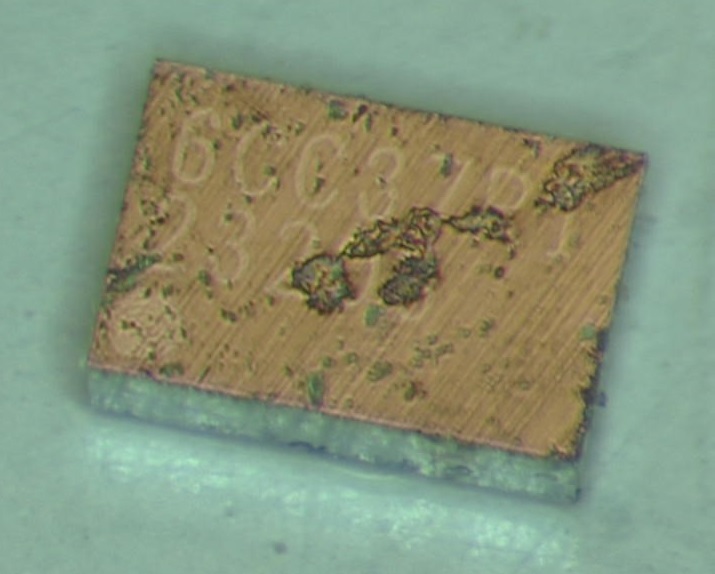 This one is not a mystery anymore. Johan, told me (in the comments) that it is a CSD23203W –8-V P-Channel NexFET™ Power MOSFET.
I first suspected that it is a reverse polarity protection device. It does not affect the voltage significantly.
Package type: WLCSP-6 but also listed as DSBGA-6 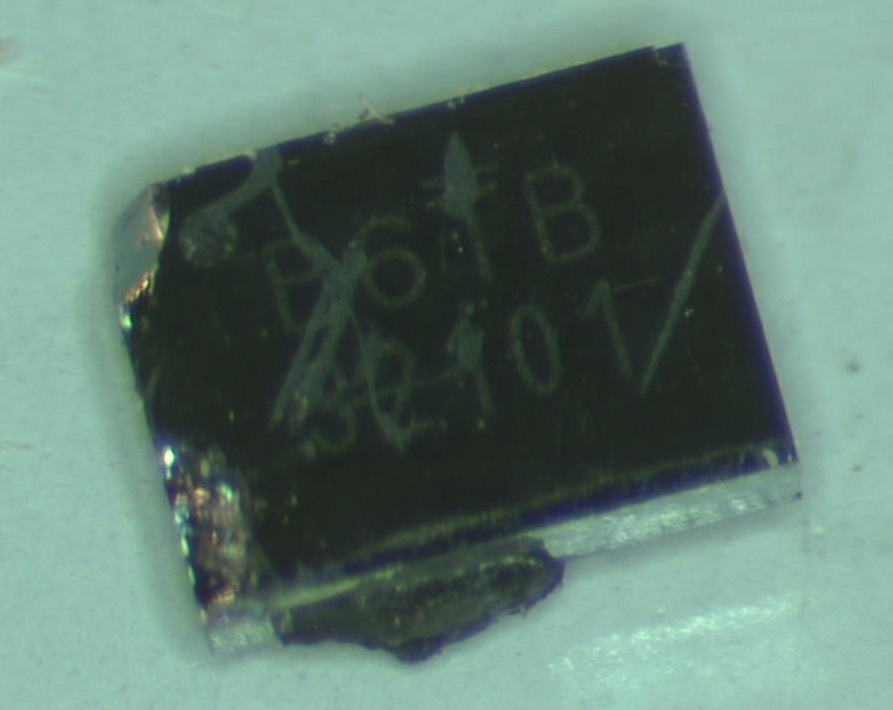 This one is not a mystery anymore. Again Johan, told me (in the comments) that it is a 6.5 mΩ, Bi-Directional Battery Switch in Compact WCSP.
This is indeed a switch. There is one pin which comes from the GPIO-Power pin. When power is provided to the GPIO connector, the supply from the battery is cut off. It does not affect the voltage significantly.
Package type: WLCSP-12

The component is covered with a black resin of some sort. Heating it with an iron gives fumes which really burn in your eyes. After experiencing that I mechanically removed it with a blade. That explains the scratch marks on the component.

This one is not a mystery anymore. My co-worker, Ivan Waterman, told me that it is a PTC RESETTABLE FUSES 1.0A 6V 1206. I did not think of a fuse. In the schematic, they are in series with the batteries. My first guess was that it is a diode but the multimeter says it surely wasn’t.

A lot more can be done to find out its inner workings. Stay tuned and subscribe to this site to receive a notification when the article is changed.